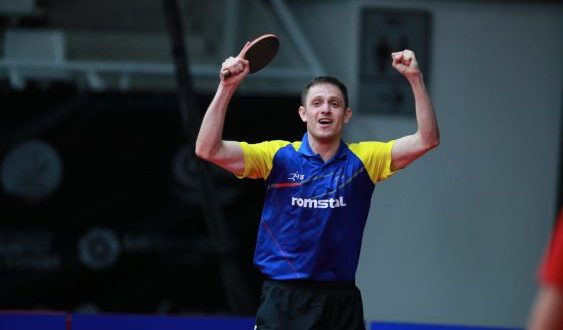 The clash between Dimitrij OVTCHAROV of Germany and Vladimir SAMSONOV of Belarus will certainly be one of the jewels of tomorrow’s competition day at the LIEBHERR 2018 ITTF European Championships. In Men’s Singles Event both players reached the Round 16.

“That was one of the best matches I played recently. The one against DEVOS yesterday and this one against SHIBAEV proved that I am in very good shape. However, in the Round of 16, I am still very far from the title,” said OVTCHAROV. ”The draw showed no mercy. Tomorrow I will play against very strong SAMSONOV. It will be very difficult.”

“After I won the opening game, I felt confident, but MOREGARD change the pace of the game. I lost next two games without making many mistakes and I was forced to change something. I started to play more aggressive in order to regain the control,” said SAMOSNOV.

Jonathan GROTH of Denmark overcame Diogo CARVALHO of Portugal (-14, 4, 8, 2, 9). Reigning champion Emmanuel EBESSON of France also excited the competition. He has been beaten by Ovidiu IONESCU of Romania (9, 9, 10, -7, 7).

“Two out of three opening games I lost after 9:9. IONESCU was better in the finish in each occasion. When he felt he is in control it was impossible to stop him. I am very disappointed, but it is not the end of the World,” said LEBESSON.

“I knew WANG very well because he had played in Bundesliga. However, it did not help a lot, WANG blocked me very effectively and I could not play fast balls. I could not win points quickly and I had to be patient. I had to wait for WANG to attack first,” said WALTHER.

Jon PERSSON of Sweden prevailed in straight games against Martin ALLEGRO of Belgium (6, 6, 5, 14).

“I am very happy with my performance here. I took the control from thee early stage. I was very aggressive. I attacked early and forced ALLEGRO into the mistakes. I am happy with my receive, service game, the way I moved…”said PERSSON.

“Everything was all right before fourth game. Then Alvaro raised his game, the spectators woke up, they became frantic and I lost my focus. I managed to calm down, because I had decent lead. All in all, my service game was good so I controlled the match well. Only in fourth game Alvaro managed to make the points longer,”  said APOLONIA.

“For me it was must to have a good start, but Joao made it very difficult. I was under pressure, little bit nervous. I did not expect that GERALDO improved his game so much in last year. I changed my service and rhythm of the game and with good backhand managed to win eventualy,” said Liam.